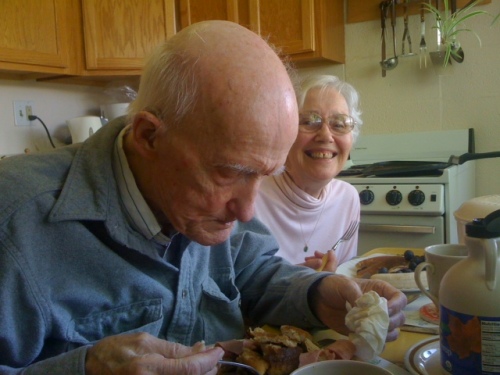 McConnell’s grandfather was at the Azusa Street Revival and his parents were founding members of the Assemblies of God.

Read about McConnell in the article, “John McConnell, Jr. and the Pentecostal Origins of Earth Day,” published in the 2010 edition of Assemblies of God Heritage magazine.  Flower Pentecostal Heritage Center Director Darrin Rodgers recorded an oral history interview with McConnell and his wife, Anna, on July 15, 2009, at Timberline Church, Fort Collins, Colorado.

McConnell deposited materials relating to his Pentecostal faith and the lives and ministries of his parents and grandparents at the Flower Pentecostal Heritage Center.

The following obituary was posted on the Monarch Society website:

“Peace, Justice and the Care of Earth.”  McConnell, 97, died peacefully on October 20, 2012.  Memorial Service will be Friday, Nov. 2 at 10:30 am at St. John’s Lutheran Church, 700 S. Franklin St., Wash Park, Denver.  In lieu of flowers, the family requests you please consider a donation to Shevet Achim (www.shevet.org), a non-profit in Jerusalem which brings Jews, Muslims, and Christians together in order to give life saving surgery to save children’s lives.  John McConnell is survived by his wife, Anna McConnell, his son, Cary McConnell, and two daughters, Christa Mason and Corenella Keiper.Son of an evangelist, John McConnell has advocated tirelessly for global peace, and care of the Earth.  People all over the globe have responded to his appeals for peace, justice, and Earth care, and to be counted as Earth Trustees.

Following the Kennedy assassination, McConnell’s Minute for Peace gained worldwide attention.  This led to his Earth Day and other initiatives aimed at promoting people and planet.  In this book, he shares the views that garnered support during the environmental movement from 1969 onward, and that have inspired followers for forty years at annual Earth Day ceremonies at the UN and cities across the globe.

John McConnell coined the term Earth Day in 1968, proposed its celebration on the spring equinox to the City of San Francisco in October 1969, and announced it in November at a UNESCO Conference.

John McConnell is one of the world’s spiritual leaders who had a profound influence on the United Nations. — Kurt Waldheim, former United Nations Secretary-General

With John McConnell’s Earth Flag on board my spaceship, I felt like a messenger of peace.  — Anatoly Berezovoi, cosmonaut

John McConnell is an idealist, a visionary, a peacemaker.  Those are the people needed today, for our future.  — George Gallup, Jr., pollster