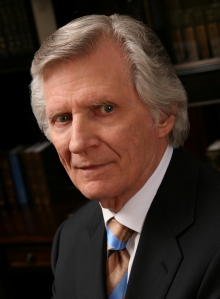 Reverend David Wilkerson, the author of The Cross and the Switchblade, as well as the founder of Teen Challenge, World Challenge Ministries and Times Square Church, was killed on Wednesday, April 27th in a head-on collision at Tyler, Texas. He died at the scene, while his wife was rushed to hospital where she remains under observation. He was 79.

A private funeral service held on May 2nd at Rose Heights Church of God, in Tyler, was attended by members of Wilkerson’s family and close friends, including evangelist Nicky Cruz. His body was laid to rest in Lindale, Texas. During the funeral service, a tribute video was shown to those who attended. To view this video, please click on: A Tribute to David Wilkerson.

Members of the church and the public will have the chance to pay their respects at a memorial service to be held at Times Square Church in Manhattan, New York City at 2:00 p.m. Eastern Time on Saturday, May 14, 2011. There will be overflow locations once full capacity has been reached inside the church. The service will be streamed live beginning at 2:00 p.m. on the Times Square Church website. A simultaneous translation of the service will be available in 10 different languages via conference call lines, details of which will also be posted on the church’s live stream page.

Wilkerson left a lasting legacy through his evangelistic ministry which spanned four decades and included preaching, teaching and writing. He has authored over 30 books, but was well known for having written “The Cross and the Switchblade,” also made into a movie, which gave an account of his ministry among New York gang members and drug users. Over 50 million copies of the book have been sold and it has been translated into 30 languages. This led to the establishment of Teen Challenge which has continued to minister to those caught in addictions. Today, there are 233 Teen Challenge Centers in the United States and 1,187 total worldwide.

In 1987, David Wilkerson returned to “the crossroads of the world” to establish Times Square Church. Since then, he faithfully led this congregation, delivering powerful biblical messages that encourage righteous living and complete reliance on God.

With a strong burden to encourage and strengthen pastors throughout the world, Wilkerson has been traveling around the globe since 1999, holding conferences for Christian ministers. His last blog, posted on April 27th, ended with these words: “Stand fast in [God’s] Word. There is no other hope in this world.” See: “When All Means Fail.” David Wilkerson was living in Texas with his wife, and together they have four children and 11 grandchildren.

The Pentecostal Evangel is also working on an issue in tribute to David Wilkerson.

For an overview of David Wilkerson’s life and ministry, see: http://www.worldchallenge.org/about_david_wilkerson

Some additional posts regarding David Wilkerson can be found below:

“Call to Anguish” (David Wilkerson’s soul-stirring sermon on the necessity of anguish – to bear God’s heart, passion, and burden within our lives) posted on YouTube.

“Call to Anguish” (David Wilkerson’s soul-stirring sermon on the necessity of anguish – to bear God’s heart, passion, and burden within our lives) posted on YouTube.

“The Dangers of the Gospel of Accommodation” (A sermon given by David Wilkerson at an Assemblies of God Headquarters chapel service on March 10, 1998, now posted on AGTV).

A transcript of Wilkerson’s message on the Dangers of Accommodation in Enrichment Journal, Winter 1999.