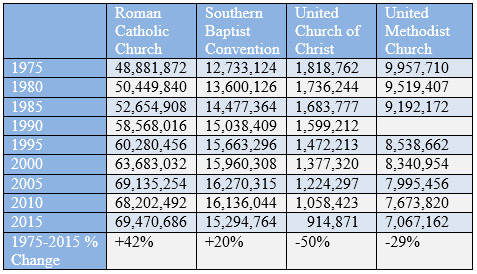 Over the past 40 years, the number of adherents of mainline Protestant denominations has declined significantly. The Roman Catholic Church and Southern Baptist Convention both show modest increases, although their growth has plateaued in recent years. The Assemblies of God, like many Pentecostal groups, has experienced significant growth over the past four decades.

Farmhouse where Lillie Corum was baptized in the Spirit in 1907

Just after the Azusa Street revival broke out in Los Angeles in 1906, Evangelist Rachel Harper Sizelove began writing glowing reports to her sister, Lillie Corum, who lived in Springfield, Missouri. Mrs. Corum started reading copies of William Seymour’s Apostolic Faith paper, and she earnestly began seeking and praying to receive the baptism in the Holy Spirit.

The next May, Rachel Sizelove traveled from Azusa Street to Springfield to visit her sister and family. And in an all-night prayer meeting, Lillie Corum was baptized in the Spirit at her farmhouse in the wee hours of June 1, 1907. She is credited with being the first person in Springfield to receive the baptism in the Holy Spirit. And soon afterwards, the Corum family, rejected by their Baptist pastor, began holding prayer meetings in their home. This was the beginning of Central Assembly of God, the mother church in Springfield, Missouri.