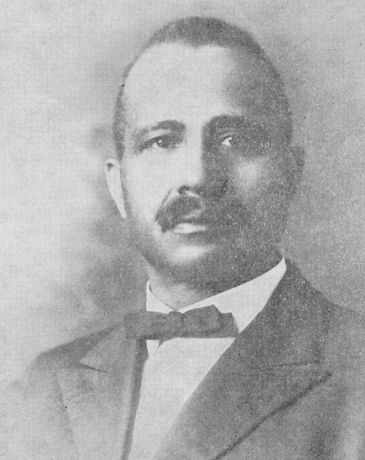 Charles Price Jones (1865-1949) was a prominent African American church leader, composer, educator, theologian, and poet. He founded the Church of Christ (Holiness) U.S.A., an African American Holiness denomination that shares a common history with the Church of God in Christ. He composed over 1,000 songs, many of which continue to be sung in churches across the denominational and racial divides. The songs for which Price is possibly best known are “Deeper, Deeper” and “Come Unto Me.”

Jones was licensed to preach as a Baptist minister in 1885. Jones was concerned that many Christians of his day seemed unconcerned with spiritual disciplines and godly living. He identified with the Holiness movement, seeking to bring spiritual renewal to black Baptist churches. He served as a pastor and an evangelist throughout the South. He also served as editor of the Baptist Vanguard newspaper, published by Arkansas Baptist College.

The emergence of the Azusa Street Revival (1906-1909) resulted in a split within the Holiness association led by Jones. While Jones and Mason both acknowledged that the gift of speaking in tongues had not ceased, they differed on whether it was the evidence of baptism in the Holy Spirit. Mason accepted the Pentecostal view of evidentiary tongues, while Jones did not. The led to the 1907 organization of the Pentecostal group, over which Mason was selected as overseer. Both groups went by the name Church of God in Christ. After several years of legal battles over the use of the name, Mason’s group won the right to call itself Church of God in Christ. Those who followed Jones incorporated in 1920 as Church of Christ (Holiness) U.S.A.

During the first half of the twentieth century, Jones was a well-known figure in African American Holiness and Pentecostal circles. However, in recent decades Jones and his remarkable achievements have faded from the memory of many Christians. This may be partly due to the relative growth of the two groups. The Church of Christ (Holiness) U.S.A. reported 12,960 members in 139 churches in the United States in 2012. The Church of God in Christ, however, in 1991 reported 5,499,875 members in 15,300 churches (these statistics apparently include worldwide members and churches).

Dr. Anita Bingham Jefferson, Christian educator and women’s leader in the Church of Christ (Holiness) U.S.A., has sought to educate new generations about Jones and his legacy by preserving and promoting his writings and life story. Over the past forty years, she has gathered historical materials. Since 1981, she has written or published seventeen books about Jones and the history of the Church of Christ (Holiness) U.S.A.  Several of Jefferson’s books about Charles Price Jones are still in print and are available on amazon.com.

Jefferson has deposited copies of her books, as well as some of her research materials, at the Flower Pentecostal Heritage Center (FPHC). These materials shed important light on Jones and the Church of Christ (Holiness) U.S.A., as well as more broadly on African American hymnody and the African American Holiness movement.

Pentecostal historians will find the collection indispensable in their efforts to better understand Charles Harrison Mason and the origins of the Church of God in Christ, which cannot be understood apart from the history of the Church of Christ (Holiness) U.S.A.

Interestingly, the denominations led by Jones and Mason identify differing origin stories. The Church of Christ (Holiness) U.S.A. originated in 1897. In 1896, after an extended period of prayer, Jones felt impressed by God to call for a Holiness convention. The convention was held the following year, in June 1897, at Mt. Helm Missionary Baptist Church.

One of Dr. Jefferson’s books about C. P. Jones

Dr. Anita B. Jefferson deposited the collection at the FPHC with encouragement from Mother Mary P. Patterson, widow of J. O. Patterson, Sr., who served as Church of God in Christ Presiding Bishop (1968-1989). Patterson, through her company, the Pentecostal Heritage Connection, has spent over 12 years raising awareness of the Charles Harrison Mason’s formative ministry years in Mississippi. She organized tour groups of Lexington, she built relationships with community leaders, church leaders, and academics, and she spearheaded the placement of two official State Historical Markers in Lexington. Patterson deposited her husband’s papers at the Flower Pentecostal Heritage Center in 2012.

The Charles Price Jones/Anita Bingham Jefferson Collection takes its place alongside other significant African-American Pentecostal collections deposited at the FPHC in recent years, including:

Do you have Pentecostal historical materials that should be preserved? Please consider depositing these materials at the Flower Pentecostal Heritage Center (FPHC). The FPHC, located in the Assemblies of God national offices, is the largest Pentecostal archives and research center in the world. We would like to preserve and make your treasures accessible to those who write the history books.

Review: Portraits of a Generation

Portraits of a Generation talks about many of the early Pentecostal leaders. Instead of giving a large, drawn-out list of every leader in the Pentecostal movement, it gives the testimonies and interests of those leaders that maybe weren’t quite as famous. It gives insight into who really had the vision and those who desired seeing those visions put into real life. In this book, they represent leaders from all different walks of life. They differ on areas from ideas about theology, ethnic and social background, and areas of living. There is a common view that Pentecostalism was a movement without structure or leaders, but this book instead shows that the movement had a strong sense of both.

Portraits of a Generation is separated into three sections: “Forerunners,” “Visionaries,” and “Builders.” All of the chapters are about individual early leaders. Many of the contributors are known scholars of Pentecostalism while others aren’t very well known in the academic world.

In the first section, “Forerunners,” the leaders that the editors include are John Alexander Dowie, E. L. Harvey, Charles Price Jones, Frank Sandford, and Alma White. They are all leaders who paved the way toward the formal Pentecostal movement. These leaders were not directly tied with the Pentecostal movement, and some didn’t believe in the same standards that Pentecostals do today, such as speaking in tongues. Though not specifically under the Pentecostal umbrella, they laid out some of the ground beliefs and ideals that were later accepted into Pentecostal doctrines.

In the section on “Visionaries,” there are discussions about Minnie F. Abrams, Frank Bartleman, William H. Durham, Thomas Hampton Gourley, Alice E. Luce, Francisco Olazábal, and Maria B. Woodworth-Etter. These leaders were between the forerunners and the builders. They were the ones who envisioned what the movement eventually became and helped provide for the structure. Francisco Olazábal was one of the main contributors in the growth of Pentecostalism in the Hispanic culture while Minnie F. Abrams, Alice E. Luce, and Maria B. Woodworth-Etter gained popularity in being some of the first female leaders for the Pentecostal movement.

“Builders,” the last section, discusses the leaders Florence Crawford, G. T. Haywood, Charles Harrison Mason, Carrie Judd Montgomery, Antonio Castañeda Nava, Ida B. Robinson, George Floyd Taylor, and A. J. Tomlinson. In this section, Pentecostalism begins to take on the form of classical Pentecostalism. The people included in this section are those who heard and saw what the other leaders were trying to do and started to put their beliefs and ideals into action.

Because the volume is collective, there are some essays that were different in the quality of their sources than others. Some of the arguments had limited sources so are based on suppositions. Overall, the quality of the essays is very professional. All twenty-two chapters looked at Pentecostalism in three different lights: those who came before, those who had the vision, and those who put the vision into action. This gives us a good understanding of the early stages of the Pentecostal movement and how it was viewed by those with whom it began.

Softcover, 430 pages, illustrated. $34.95 plus shipping. Available from amazon.com or barnesandnoble.com