Sixty-nine years ago an eleven-year-old boy, Elvin Farmer, walked door-to-door in Glenwood, Arkansas, asking friends and neighbors to buy the Pentecostal Evangel for two cents each. It was a very proud moment for the earnest young man when he learned that he was the top seller in his area and that his achievement would be noted in the October 15, 1938 issue of the Pentecostal Evangel.

That story prompted one of his four daughters to recently visit the Flower Pentecostal Heritage Center, located in the Assemblies of God Headquarters in Springfield, Missouri. A thorough search yielded the 1938 article, which was to be a surprise gift for Farmer’s 80th birthday party in California in April 2007.

According to his daughter, Darla, Farmer is “very proud that he raised his four daughters in the Assemblies of God.” She stated that the tour allowed him “to see the inner workings” of the Fellowship and “gave him a stronger sense of belonging.”

When traveling through Springfield, be sure to stop and visit the Assemblies of God Headquarters. Free tours include visits to the Gospel Publishing House, AG World Missions, the Flower Pentecostal Heritage Center and more! Explore our websites for more information on the Flower Pentecostal Heritage Center museum and the guided walking tour of the Assemblies of God national headquarters.

Dan Betzer on the blessing of “Heritage”

He followed C. M. Ward as speaker on the Assemblies of God’s flagship radio program, Revivaltime, broadcasting from 1979 to 1995. Our younger readers will know him as the voice behind the Dan and Louie Bible stories that they grew up with.

He currently hosts “ByLine with Dan Betzer,” a two-minute program heard weekdays on radio stations nationwide. He also hosts the 60-second weekday ByLine Television commentary, which is aired around the world on over 900 television stations. Here is a reprint of his “ByLine” radio message from July 17th.

Hello again, this is Dan Betzer. In our fellowship, the Assemblies of God, we have a periodical called Heritage. To us nostalgic types, the magazine is a blessing. We read stories and see pictures of the great men and women of the past who shaped our fellowship, heroes in the truest sense of the word. I think I have every issue ever printed. They are bound in huge volumes so they are easy to pick up and read. END_OF_DOCUMENT_TOKEN_TO_BE_REPLACED 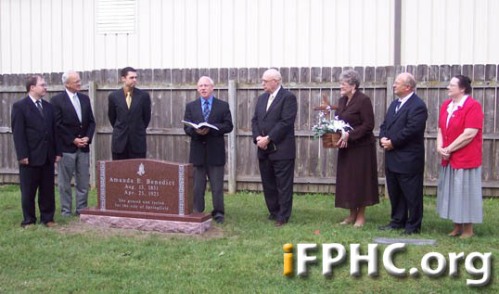 As part of the celebration of 100 years of Pentecost in Springfield, Central Assembly chose to honor one of the early leaders in the church, Miss Amanda Benedict, who is remembered as a fervent prayer warrior.

Educated in New York, her home state, she later conducted a rescue home for girls in Chicago and was connected with a faith home for children in Iowa. She moved to Springfield, Missouri, sometime before 1910 and met Mrs. Lillie Corum while working as a door-to-door salesperson. The two ladies and others began praying together regularly, and soon Amanda Benedict received the baptism of the Holy Spirit. She had a burden for lost souls and that God might bless the gospel work in Springfield, Missouri.

Sister Benedict would fast and pray for days on end, until a burden was lifted or victory came. Often, like Napoleon, she would say, “There shall be no Alps!” She had a tremendous burden that God would make Springfield a center from which his blessings would flow to the ends of the earth. At one point she felt led to fast and pray for Springfield for one entire year — living only on bread and water.

END_OF_DOCUMENT_TOKEN_TO_BE_REPLACED

Farmhouse where Lillie Corum was baptized in the Spirit in 1907

Just after the Azusa Street revival broke out in Los Angeles in 1906, Evangelist Rachel Harper Sizelove began writing glowing reports to her sister, Lillie Corum, who lived in Springfield, Missouri. Mrs. Corum started reading copies of William Seymour’s Apostolic Faith paper, and she earnestly began seeking and praying to receive the baptism in the Holy Spirit.

The next May, Rachel Sizelove traveled from Azusa Street to Springfield to visit her sister and family. And in an all-night prayer meeting, Lillie Corum was baptized in the Spirit at her farmhouse in the wee hours of June 1, 1907. She is credited with being the first person in Springfield to receive the baptism in the Holy Spirit. And soon afterwards, the Corum family, rejected by their Baptist pastor, began holding prayer meetings in their home. This was the beginning of Central Assembly of God, the mother church in Springfield, Missouri.