J. Narver Gortner: The Methodist Pastor Who Became an Assemblies of God Pioneer 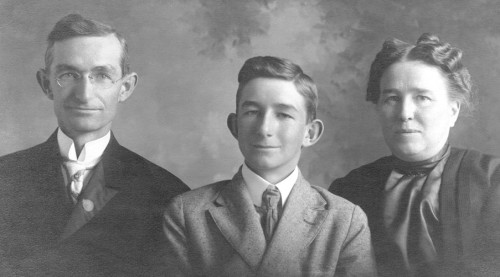 J. Narver and Della Gortner, with their son, Vernon, circa 1914

J. Narver’s father was an old-fashioned Methodist preacher who taught the importance of holy living and who believed that God still performs miracles. His father yielded to a call to serve as a missionary in Liberia. The Gortner family sailed for Liberia in 1887, but their life as African missionaries was short-lived. J. Narver’s father died in 1888, and his grieving widow and two sons went back to America, where they settled on the family farm in Nebraska.

The sorrowful experience in Liberia might have caused J. Narver to reject the thought of entering the ministry. However, he felt a pull toward the pastorate and enrolled at Garrett Biblical Institute (now Garrett Theological Seminary) in Evanston, Illinois. He began pastoring his first church, a Methodist congregation in Inman, Nebraska, at the age of 19.

Narver pastored several churches in Nebraska, numerous people accepted Christ under his ministry, and he rose in prominence in the Methodist Church. In 1911, his wife, Della, became deathly sick. J. Narver accepted the pastorate of a church in southern California, hoping that the change in climate would bring a measure of relief to Della.

Della did get better, but her healing did not come from the weather. Rather, she attributed her healing to the prayers of several Christians, including Pentecostal pioneer and medical doctor Finis Yoakum. She often testified that before she was healed, she had subsisted for fourteen months primarily on raw eggs and malted milk. After she was healed, she could eat beef, mashed potatoes, and gravy, and anything else she wanted.

Della’s healing caused the Gortners to view Pentecostals favorably. Pentecostals were generally considered part of the broader Holiness and Wesleyan movements, with which the Gortners also identified. However, Pentecostals also placed an emphasis on the baptism in the Holy Spirit with an evidence of speaking in tongues, which was not emphasized in Gortner’s Methodist church.

In 1914, J. Narver read about a Pentecostal camp meeting slated to be held in Cazadero, in the California Redwoods. Carrie Judd Montgomery, an early Pentecostal healing evangelist, was going to minister at the camp. He had read Montgomery’s periodical, Triumphs of Faith, and wanted to experience a Pentecostal service for himself.

J. Narver attended the camp and received a powerful experience of being baptized in the Holy Spirit. He also was healed of a long-standing painful spinal condition after evangelist Smith Wigglesworth, another speaker at the camp, prayed for him.

The 40-year-old Methodist pastor was both exhilarated and in a quandary. He wanted to testify about his baptism in the Holy Spirit and his healing.  However, he thought it would likely cost him his position as a Methodist pastor and denominational official.

Gortner went home and next Sunday morning told his Methodist congregation in Arroyo Grande what had happened to him. They listened with interest, Methodist officials did not remove him from the pastorate, and his fears subsided. He remained in the Methodist church until 1919, when he decided to become more involved in the young Pentecostal movement.

Gortner transferred his ordination to the Assemblies of God and quickly rose in prominence in his new church. In 1920, he became the first superintendent of the Central District of the Assemblies of God, and the following year he became a member of the Executive Presbytery, a position he kept for 26 years. He also served as a pastor in Oakland, California (1927-1937) and president of Glad Tidings Bible Institute in San Francisco (1941-1947). He authored five books and over 250 articles published in the Pentecostal Evangel.

According to historian Carl Brumback, Gortner was a very influential theologian and church leader in the Assemblies of God from the 1920s through the 1940s. Brumback viewed J. Narver Gortner, Samuel A. Jamieson, and P. C. Nelson as a “doctrinal trio” which had “a great part in molding the conservative nature of the Assemblies of God.” In 1927, Gortner championed the idea of changing the name of the Assemblies of God to The Pentecostal Evangelical Church. Gortner was not ashamed of being Pentecostal and thought the term Pentecostal should be in the name of the Fellowship. He also built bridges across the denominational divides and played a significant role in the formation of the National Association of Evangelicals.

In its early decades, the Assemblies of God benefited significantly from an influx of veteran ministers from other denominations whose lives had been touched by the work of the Holy Spirit. J. Narver Gortner was one such minister, and his influence can still be felt through the countless lives that he touched through his ministry and writings.

Read Gortner’s testimony on pages 6 and 7 of the October 25, 1930, issue of the Pentecostal Evangel.