50 Years Ago: The Pentecostal Assemblies of Canada Celebrated its 50th Anniversary 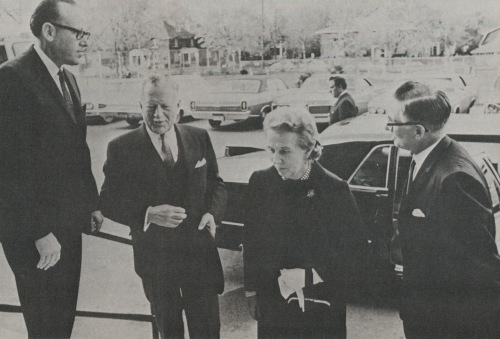 R. W. Taitinger (left), General Superintendent of the PAOC, welcomes Governor General and Mrs. Roland Michener to the closing rally of the Jubilee Celebration. James Montgomery, Jubilee coordinator, is standing on the right.

Fifty years ago the Pentecostal Assemblies of Canada (PAOC) commemorated its 50th anniversary with a “Jubilee Celebration,” which involved several different Jubilee rallies throughout Canada held during the spring of 1969.

The closing events included a rally at the Bethel Pentecostal Church in Ottawa on May 17, which started with a large parade representing 15 mission fields supported by the PAOC.  This was a 30-minute pageant with the theme: “Let the Earth Hear His Voice.” Rev. Carman W. Lynn, Executive Director of Overseas Missions highlighted missions work in the PAOC. Robert W. Taitinger, General Superintendent of the PAOC, gave a challenge at the end of the service.

The final Jubilee Rally took place at Glebe Collegiate Auditorium in Ottawa on Monday, May 19, Victoria Day. It was attended by some 600 Pentecostals from the two Ottawa congregations as well as about 50 visitors from the Ottawa Valley and other places in Canada and the U.S. Governor General and Mrs. Roland Michener were honored guests for this service. Governor General Michener, the Queen’s vice-regal representative in Canada, gave the Scripture reading from the second chapter of Acts. Rev. Taitinger concluded the program with a dramatic Jubilee declaration with audience participation.

The declaration stated in part: “Recognizing that the year 1969 marks the Jubilee of the Pentecostal Assemblies of Canada and that the evident hand of God has rested these 50 years upon The Fellowship, we do acknowledge with grateful thanks the goodness and blessing of the Lord and do reaffirm our committed allegiance to the great God for the church in the world today, and our significant place in His purpose.”

Looking back on PAOC history, in 1909 an early attempt was made to create an organization among Canadian Pentecostals, but that did not materialize. About 10 years later, the PAOC was formed in Eastern Canada, receiving its charter on May 17, 1919 in Ottawa, Canada. About this same time, Pentecostals in Saskatchewan and Alberta, Canada joined the U.S. Assemblies of God and became what was called the Western Canadian District. By 1925 this district had dissolved and those ministers and churches had joined the Pentecostal Assemblies of Canada.

From about 20 congregations in 1919, the PAOC increased to approximately 900 congregations by 1969. Pentecostal work began in Ottawa with a church established by the late R. E. McAlister in 1908 which was one of the congregations that joined the new organization. Toronto and Winnipeg were other early centers of Pentecostalism in Canada. McAlister served as the first general secretary of the PAOC from 1919 to 1932. Because of its close connections with the U.S. Assemblies of God, the PAOC adopted the same statement of fundamental truths which had been approved by the General Council. R. E. McAlister published the Assemblies of God’s statement of fundamental truths in the February 1926 of the Canadian Pentecostal Testimony. The PAOC made changes to their statement of faith in later years.

It is significant that not only was the PAOC chartered in Ottawa, but for its first four years (1919-1922) Ottawa was the national headquarters for the PAOC. Ottawa was also the first location that published the PAOC national magazine, The Pentecostal Testimony (now Testimony magazine). The PAOC International Office is now located in Mississauga, Ontario.

David Wells, current General Superintendent of the PAOC, stated, “In 2019 we move into our centennial year as a Pentecostal Fellowship in Canada. Anniversaries such as a centennial provide an excellent opportunity to reflect on the faithfulness and passion of those who have gone before us and to move into the future with vision, committed to the values that have produced a legacy of fruitfulness.”

Read more about the 50th anniversary of the PAOC on page 14 of the August 3, 1969 issue of the Pentecostal Evangel.